{Isaac playing with the potatoes. Mama took them away when he started to eat them. He’s sad.}

Baby Isaac isn’t so babyish anymore! He’s 19 months today. How fast he is growing. He got his first tooth on his first birthday. He was just learning to eat pureed baby food and sit in a highchair and now?

Little Isaac sits very well in a highchair, though he still relies heavily on the buckles as he can not sit up on his own yet. He still nurses just just here and there. His new passion is chocolate milk. Most exciting? He’s eating real people food now. He loves peanut butter sandwiches, ice-cream cones and chicken.

Despite not being able to sit up on his own, this boy can move! He rolls all over – fast! He can’t bear his full weight on his arms yet to get up and crawl however he bears weight on his forearms so he does this little army creep and it looks so cute. He goes from one end of the house to the other, quickly and destructively. He flips over the bedroom garbage, I can tell by the dirty tissues all over my room. He empties the face cloths and towels out from under the sink in the bathroom, he pulls books off the shelf in daddy’s office. Then he moves into the front room and throws puzzle pieces through the gate down the stairs. All of this before breakfast!

But it makes my heart happy to see his curiosity and mobility! It’s so encouraging.

Isaac bears weight on his legs briefly, which is also encouraging. We bought him a special jumper, Merry Muscles, and while he doesn’t jump in it, he does wiggle his arms and legs as he gets excited so he does some weight bearing that way too.

Little Isaac has three bottom teeth, four top teeth, one top and bottom molar on one side and another bottom molar popping through on the other side. A whole mouthful! 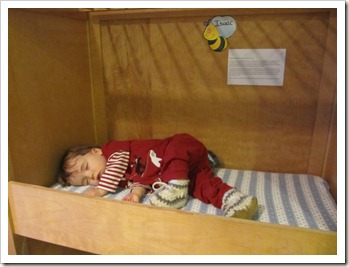 Isaac still doesn’t say much. We had our assessment and I expect speech therapy to begin next month. We still go to physiotherapy and occupational therapy each week and we started KinderMusik this fall. Isaac loves the class and at 18 months, he clapped for the first time.

We have an MRI coming up next week and we’re still waiting for the results of some genetics tests (blood tests). Isaac had nephrocalcinosis which had  resolved according to the ultrasounds this spring however for some reason, the calcium deposits are back. He’s started on some meds for it. We also had some excitement this summer as he had two grand mal seizures and then several focal seizures  as well. They said due to his brain injuries, he’s just more prone to them. Neurology wants to have a look at his next MRI and compare it to the last one to see if there are any changes.

He hasn’t had any seizures since the end of September, which is great. Despite what it looks like on paper, he’s doing really well and making incredible progress. Above all, he’s the happiest, sweetest little baby ever.

I’m just so thankful for this busy, mischievous little man! Thank you all for your prayers.