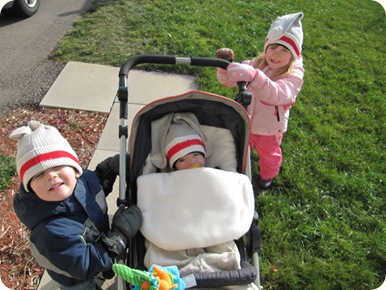 Isaac is 7 months – how time has flown. In some ways it seems like a million years ago since Isaac and I lived at the hospital for all those weeks. Yet, in other ways it seems like just yesterday. But then life is often like that isn’t it?

Thank you all for your continued prayers. I know many of you are anxious for an update and what mommy isn’t happy to oblige with tales of her adorable children?

So little Isaac is not so little these days. His weight at 7 months? A whopping 20 pounds 2 oz!He’s tall too – 72 cm!! Though I guess technically it is length not height until he is standing right?

For the first six  months Isaac would go to bed around 9pm and wake up for the day around 7am but in between that period of time, he’d be up 6-8 times. Yes, those first six months I was a sleep-deprived mama, especially since he didn’t really nap during the day.

Then out of nowhere, one night at the beginning of December Isaac slept through the night. We’re talking 9pm straight through until somewhere between 6-7:30am. How amazing is that? Even more amazing? He’s kept it up. I’m heading into my second month of sleeping all night. LOVE IT! 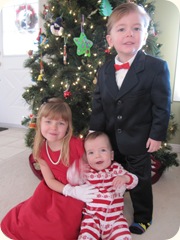 Dressed for Church (yes, he wore this sleeper a lot in Dec.)

Though the first month and a half of his life he ate through a tube with no stamina for breastfeeding, he eventually was able to nurse and hasn’t stopped. Sweet Isaac is a breastfeeding champ! The scale proves it, with him being in the 75th percentile for weight. We met with a nutritionist the other day who helped set up Isaac’s new eating plan. He breastfeeds on demand but now also has 1-2 tablespoons of rice cereal and pureed chicken at lunch and dinner. With my other two tots, we started with fruits and veggies but with Isaac they recommend the extra protein to help with muscle-building. We’re also eating some custard just for fun. Everything is very soft, mushy and liquid-y {yuck} but he’s just started as the doctor wanted solids delayed until Isaac had a little more body control. His high chair has a 5 point harness which helps support him and we have him reclined a little so he’s off to a good start I think.

Oh, and no sign of teeth yet, though he is adept at tongue calisthenics 🙂

Isaac is able to roll from back to front most of the time. I’m so proud, this was a huge accomplishment for him and one that he’s been working on for a while! He can sometimes roll from tummy to back but it depends on what position his arms are in. He hates tummy time however he can lift and hold his head up for short periods of time when on his tummy. {Go Isaac!}

His trunk muscles are still very weak so the jumperoo didn’t work well for him at all. I was able to track down a traditional jolly jumper which supports him much better. He’s able to hold his head and neck up well on his own and with the extra middle support, he can hang there in the door way. I haven’t been able to get him to put weight on his feet yet or do any jumping but that will come I hope!

His fine motor skills are very good and his hand/eye co-ordination is impressive. When he sees something he wants, he’s very deliberate in his reach for it. 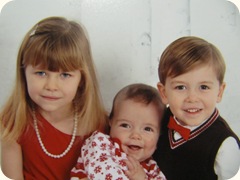 Off our Christmas Card

Isaac is a social little man. The minute he sees Chloe or John, his face lights up in a smile. Truthfully, Isaac has a smile for anyone who talks nice to him or tells him he’s handsome. He laughs and chuckles when he finds something funny. It’s the sweetest sound; I love it.

Overall, Isaac is doing well. He’s growing well, 75th percentile for weight and 95th percentile for length. His head is growing a little faster than they would like but so far, they haven’t determined if there is a reason or if he’s just having a head growth spurt. He did have an ultrasound which revealed no change since his last one, which is good. We are just waiting on an MRI appointment, which should hopefully be soon.

His calcium deposits in his kidneys have completely disappeared and his kidneys are maturing nicely. We have one more appointment in May with the nephrologists and then I think we’ll be discharged in that regard.

Isaac enjoys his physiotherapist, Lynne, who we see weekly at Lansdown Center. She is working closely with us, showing us exercises and activities that we can do to strengthen the muscles and Isaac’s overall tone. 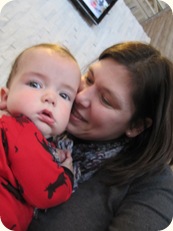 What a wonderful little baby he is. It has been a privilege to watch God work miracles in his little life and I look forward to seeing how He will use Isaac. Little Isaac  is a happy, delightful and contented little baby during the day, though sometimes evenings are a challenge. He has the sweetest smile and the cutest dimples. With Chloe, John and Isaac, I’m so blessed, busy and thankful!