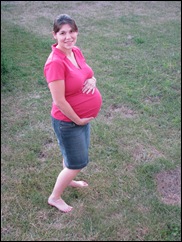 I woke up on August 7th, 2008 at 3am with contractions. Not the light “hmm, are these contractions?” that I felt with Chloe but real, “oh, I am in labor!” contractions.  About a half hour or so I laid in bed but, if you recall my success with water in labor {pain relief and increased dilation}, I decided I’d like to lounge in the bath. DH woke up and came into the bathroom to keep me company. During this time, were just talked about all sorts of things. Dinner plans, our soon to arrive son, being parents of two, who would catch this baby…

About 5:30am, things were really progressing and the contractions were quite strong. I wouldn’t talk during contractions but get on my knees and lean on the side of the tub, rocking, to work through them. About that time, my smart DH suggested that we go prepare the room for delivery. I’ll share more about preparing for a home birth in a different post but basically, I put some older sheets on the bed, along with a waterproof pad on the bed. I also put some things on the floor in case I would rather labor there on the ball like with Chloe. I also remembered that I was watching an auction on eBay for a ‘New with Tags Red Columbia Snow Suit for John’ for the coming winter. It was ending that morning so I went to my computer to bid on it in case I was “busy” later that day.

After preparing the room, I headed back to the bath. DH came with me. Again, we did very little talking but it was so comforting to have him  just sitting there. Boring for him and, as he said previously, hard. Hard to sit there and watch me work through each contraction, not being able to do anything. 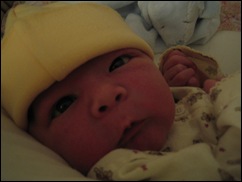 John & ‘Puppy’ The next day

Time passed quickly {for me anyway}. At 6:30am, I was talking about calling everyone. We agreed to wait until 7am. At 7am, we called mom to come over. She was going to care for Chloe while I was laboring. DH also paged the midwives, who said they would be on their way. My midwives were from Hamilton (half hour drive) so we had anticipated it being an hour for them as it was when I was in labor with Chloe. I was delighted that Katie would be my midwife again! YAY. I had also lined up a doula again. Not the same doula as with Chloe since her and I found we were not compatible but I’ll share more of that later too. So Scott called our new doula but got the machine at her home and on her cell. He left messages. 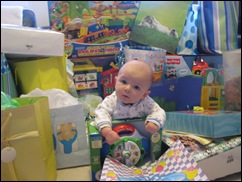 3 months old with all his shower gifts

At 8:15am the midwives arrived. They came upstairs to my room to examine me. Without my doula there to take notes, I can’t remember where I was in terms of dilation but I was doing quite well. They wondered if I would like to have my water broken and have my baby soon. An option and completely my choice. I did, but I wanted to wait until my mom arrived since Chloe (then 18 months) had just woken up. In between contractions I got her dressed and talked to her about how soon we would have a new baby. Each child is different and, though at 18 months John could have a complete conversation, Chloe could not. Chloe at 18 months just said a handful of words and didn’t really know what was doing on. By the time I’d gotten her changed and ready, my mom had arrived and Chloe happily went downstairs with Nanny Granny for breakfast. At 8:30am, the midwives broke my water and immediately, I was focusing on virtually nothing else as the contractions increased in intensity dramatically.

During this time, the phone rang. We ignored it. Apparently it was the doula returning out calls but at this time, I wasn’t interested in introducing someone knew to the scene or talking to anyone.

About 8:45 I was ready to push. I tried the birth ball (exercise ball)since it had worked beautifully with Chloe both during labor but mostly during the pushing. It was awful and uncomfortable. I was having severe back pain and as the midwives encouraged me to push, I explained that I no longer wanted to push because it hurt my back so badly. A funny thing to say since I obviously had no choice. At that point, the midwives suggested I try the birth stool they had brought. I’d never seen one in my life but I’m mostly open to trying anything suggested to see if it works or helps in any way. It turns out that a birth stool is kind of a half circle seat with a hole. Wouldn’t you know it, I liked sitting on the birthing stool, with Scott sitting on the ball behind me to support my back. The urge to push trumped the back pain and John arrived into my hands at 9:10am. Daddy had “caught” Chloe when she was born, and now I had “caught” John. He had a bit of a shorter cord so I held him low on my stomach for a bit as the midwives cut the cord.

After that is a bit of a blur. I know that I was helped back to bed where Katie did some minor repairs including stitches as I had some minor tearing again. Chloe had been 7lbs 9oz and John weighed in at 9lbs 9oz. Though two pounds bigger than his sister, I didn’t notice at all in the birthing of him. Though I had successfully nursed Chloe from birth to about 14 months when she weaned herself, I felt like a newbie when I was handed John to nurse. Katie, wonderful Katie, helped me to literally “pop” John onto my breast where he nursed contentedly. 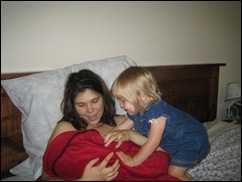 Then Nanny Granny and Chloe came in to say hello and greet John. Chloe wasn’t sure what to make of John but she was very happy to see me. She had a little visit but when John made a little noise, Chloe decided it was time to leave 🙂

DH made me waffles for breakfast in bed and then John and I had a little nap. I woke up about 11:00am and headed for the shower. After my shower, I headed downstairs to check my eBay auction. I was delighted to have won it for $9.99 plus about $7 for shipping. {New with Tags Red Columbia Snow Suit for John}. Of course my mother was wondering why I was up wandering about on the stairs and such but I had a baby…I’m not ill! 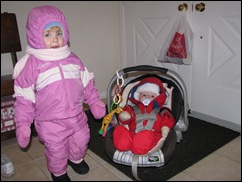 The red snowsuit I won on eBay

Dad came by a little later to have a gander at his new grandson and the rest is history!

A few thoughts from this birth: 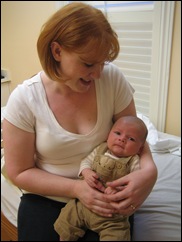 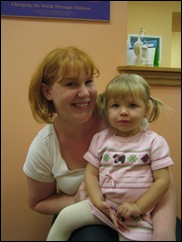 Katie, the midwife to helped bring both Chloe and John into the world.