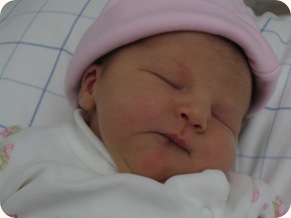 Chloe’s Birth Story (part 1) was the very factual side, largely due to my doula’s notes. This is part 2 and my memories are much briefer. I recall waking up, excited by my contractions, which weren’t really painful. Heading in to the nursery, I spent those hours thinking, dreaming and praying. It was peaceful.

The morning passed, just Scott and I waiting for Chloe to come. I enjoyed watching the movies rather than the clock. It seemed to be taking forever.

I was thankful that mom and dad came by for a visit, it was fun to share the excitement of knowing that soon, our Chloe {their first granddaughter} would be here soon.

It was comforting to have mom sitting there knitting, with music playing as we passed the night. Sometimes we talked, sometimes not. It was comfortable, warm, cozy and intimate. It was special.

After my water broke, the contractions were hard, fast and kept me busy. I went into a “zone”. It’s hard to explain but I truly believe that God created our bodies to know instinctively what to do to cope with pain. During the contractions, I was pretty oblivious to anyone or anything. I just moved as I felt I should, rocking my hips with complete focus inward on what I needed to do.

I remember saying, “I can’t do this” to the doula often in between contractions. I didn’t really believe that but, like fishing for compliments, I felt I needed encouragement that I could and I was doing it. I needed that affirmation and confirmation.

When my water broke and was blood-tinged, I was scared. I was fully aware of all that could go wrong. The only other time I was scared was during the “transition” phase as I was going from 9cm to 10cm and ready to push. It came suddenly and the feelings/sensations where overwhelming. I was panicking, and am thankful that Katie was right in my face, nose to nose, helping me focus and calm myself.

Pushing was an incredible experience. Aside from the crowning; which burned, it felt so good. The feeling of release was amazing and with that final push, utter relief. My entire body was in an incontrollable, involuntary shake from the extreme work it had just done.

DH had caught the baby. At that moment, I was so overwhelmed, I couldn’t think. I needed a moment. Once my body had stopped shaking and I made my way to bed, the feelings of wonderment at my new baby and at what my body had just accomplished were phenomenal. I felt pride, accomplishment and an overwhelming wonder that I had been able to experience all of that.

While it was hard work and there was certainly effort and pain, I look back at it as a positive, incredible, beautifully designed, life-changing experience. 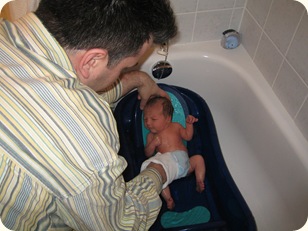 I woke up in labor but the contractions were mild with quite a break in between. It was my first labor. I was excited. But in hind site, I should have went abck to bed and tried to get some more sleep. Getting as much rest during early labor as possible is a really wise move; you never know how your labor is going to progress or how long it will take.

Be open to trying new positions, or coping techniques suggested by others. You never know what will work during different phases of your labor.

Soothing {wordless} music in the background was very helpful for me and went a long way in helping me relax in between contractions. Dim lighting helped create a relaxing mood as well.

Trust your body. I hadn’t reached the “411” rule, but I knew things were to a point that we needed to call the midwives.

Contractions {for me} seemed harder to work through lying down.

Walking up and down stairs, rocking on a birth ball, pacing etc. are all good things to get baby moving down in to position however you should not force yourself to be active if you are tired and running out of energy. You’re going to need strength and energy for pushing. My doula was continually pushing me to be active but when my midwives arrived, they encouraged me to rest.

Don’t be obsessed with numbers. I was so disheartened to hear 4cm and then to hear 7cm but you never know how fast you’ll go. It took a long time to get to 4cm but then went pretty speedy to 7c m and an absolute flash (10 minutes!) to get to 10cm. Just hang in there!

I am absolutely sold on the wonders of water in labor. Not only was the bath soothing for me, I honestly believe that both baths I had contributed to the increase in dilation.

I know that “water breaking” looks different for everyone, coming as a gush or as a trickle depending on the baby’s position, and for many women, it is broken for them {like with John}. With Chloe, it was a huge gush and sudden with little warning. I am still amazed I made it to the bathroom [Thank you, Lord!]. In hind sight I wish I’d decided to wear those Tena underwear during labor. But don’t worry, I did for John’s labor and will do so again for this next baby.

Keep in mind that when your water breaks, it may be pink {tinged from blood} and that is normal {due to the mucus plug//bloody show}.

Whether or not you are having your baby at home or the hospital, you will probably want to labor at home as long as possible. Home is comfortable, familiar and you have more freedom to roam about, eat, drink, bath, shower, go for a walk, etc.

Plan some easy activities to pass the time. Have some light movies, books, magazines {that don’t require a lot of thinking/concentration} ready to go. 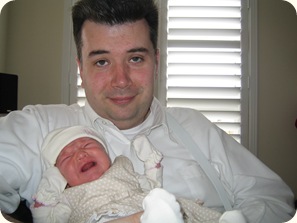 Spouse – DH came to the hospital labor & delivery classes that I registered for. I think it’s important that the spouse has an idea about how the labor would progress and some ideas for coping.  During Chloe’s birth, DH physically supported me as we walked up and down the stairs (dumb idea – see above) and also sat with me in our sitting room during the hardest contractions as I waited for the midwives to arrive. He was also involved in “catching” the baby. I didn’t need him to “do” a lot, just to be there, which he said was hard…not doing anything and watching me deal with the pain. With John, DH sat with me during my contractions and, as things progressed, he suggested getting the room ready for the birth and gave me a hand. He also supported me since I used a birthing stool for John.  Anyway, I’ve asked DH to prepare a post from his perspective. I hope to share that within the next week.

I learned that labor is hard but that I can do it. I learned that I am strong, can persevere and that it is “easy” to face whatever labor throws at you because you have to; that sweet little bundle at the end.

What was something you learned about labor, or about yourself during labor?