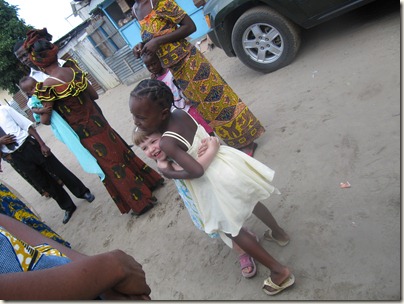 Chloe and her new friend, Blessing

We went to a local church on Sunday. The service was in French and the singing was in the local language. The music was indescribable. Singing only, no instruments. Perfect harmony. It was beautiful and almost brought tears to my eyes.

The church was a three walled structure with a roof. It was hot, but not unbearably so since it is winter here. The “winter” temperatures have been in the 30’s. John fell asleep in the sling and Chloe laid on the wooden bench. Chloe was anxious for service to be over so she could play with her new friends; especially Blessing.

When they first met, there were tentative smiles. Chloe gently caressed Blessing’s soft dark-skinned arm. They smiled at each other broadly and were instant friends. Adults could learn a lot from children’s ability to befriend others easily and without question! 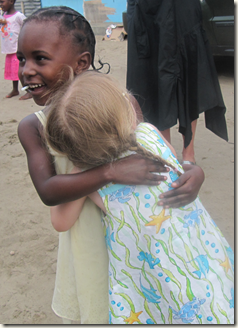 Being right on the ocean, the seafood is amazing and plentiful. After church we went to a lovely restaurant on the beach. After a delicious meal, the littles played in the sand while we enjoyed the shade of an umbrella and the ocean breeze. Chloe and John have discovered their love of seafood. John seems quite partial to calamari and crab. Chloe’s particularly fond of lobster, shrimp and…oysters! She was slurping oysters from the shell like a pro with Gigi. I love most seafood but not oysters! 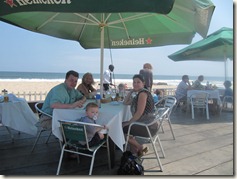 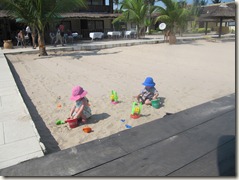 There are train tracks running through Pointe Noire. On the way home, the ancient train was blocking the road and we needed to wait for it to pass. The train apparently runs through to the capital. I say the train because though there are many tracks, apparently only one track and one train work. One is enough though isn’t it? 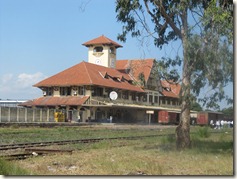 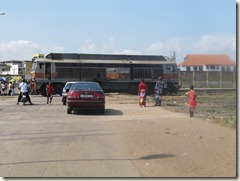