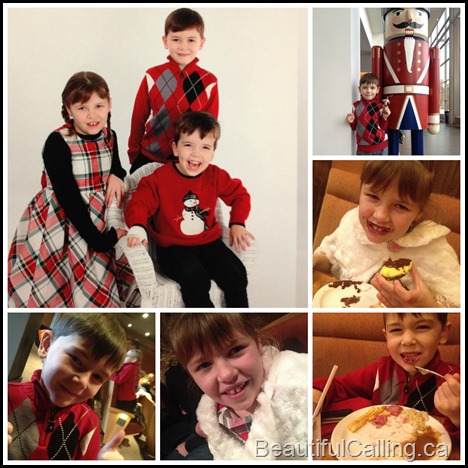 Someone once said, “the days are long but the years are short”. I’m not sure if the original intent was in relation to motherhood however that was the context in which is was quoted to me. There have been season where I felt that it was applicable and accurate though lately, I feel that both the days and the years are short; the days seem to fly by.

Last week we had our Christmas pictures taken; Superstore is quite economical and does a good job. I’m not fussy; a photo where all three are looking in any direction somewhat happy and I’m happy.

Friday Chloe (7), John (6) and myself went to see The Nutcracker Ballet at the Burlington Performing Arts Center. The CBYE and the National Ballet of Cuba put on the performance each year, some years here in the Hamilton/Burlington area and other years in Havana. They kindly offer homeschoolers a significant discount and allow us to attend the school performance matinee.

Do arrive early. It allows you time to pick up your tickets from the box office, snap some photos, buy a souvenir and make a trip to the restroom. It also allows you plenty of time to get settled in your seats.

Do ask for a theatre booster seat for smaller children. Chloe and John (7, 6) were fine this year however previous years we made use of them. The performance will capture their attention much more if they have a good view.

Do prepare them by reading or telling them a little about the story. We have an Usborne book, not this one but similar, that we have read a number of times. Remember, this is a ballet and there is amazing music but no speaking. Knowing the story will help them follow along and they will be excited as the recognize each part of the story being acted out.

The show is about 2 hours but there is an intermission {about 15 minutes} in between Act I and Act II. It’s the perfect time to stretch little legs, ask how they are enjoying it and take an additional trip to the rest room.

Attending the ballet on a school matinee day, it’s pretty family friendly. There were many others with young children there so if your little one is a little wiggly, it’s OK.

My two oldest children did well at the performance from age 3+ however my youngest is 3 but not quite ready. I would say it depends on on your child.

Wondering what to wear? We’ve only ever attended the matinee performances that involve the seniors discounted performance/school matinees so I can only speak for that but it ranges from casual to business dressy. We chose to dress up a bit, making it a special occasion. Chloe and I wore dresses and John wore a nice red argyle sweater. We made the whole day special by enjoying lunch out as well.  What a fun day it was!

The Party – The ballet opens with the guests arriving and there is a Christmas party at the Stahlbaum household. The children play and dance, welcomed by Clara {one of the main characters} and Fritz, her brother. {I love watching the adults dancing, I wish we had Christmas parties with beautiful dancing like this and long swishy dresses!} Drosselmeyer, the godfather and a toymaker with a flair for the dramatic, gives gifts, with Clara receiving a beautiful wooden nutcracker. Fritz, jealous, breaks it but Drosselmeyer fixes it for Clara with a little magic. The party winds down and the family retires for the night. Clara creeps back down to the tree in her nightclothes to check on her Nutcracker and falls asleep by the tree holding him.

The Fight – The clock strikes midnight and Clara wakes up and is frightened, surrounded by mice. {The little ballet mice are so adorable!!}. Then as the Christmas tree grows taller, the mice are joined by rats and the fierce Rat King. Thankfully, the Nutcracker prince and his brave toy soldiers engage the rats in a battle and the rats/mice are defeated.

The Nutcracker and Drosselmeyer take Clara on a magical journey, beginning in the magical Land of Snow. The snow queen and beautiful snowflake fairies put on a magical dance.

Land of Sweets – The Land of Sweets is a magical place and they are greeted by the Sugar Plum Fairy who has a special show put on in Clara’s honor. The dances include Spanish, Arabian (Chloe enjoyed this “snake” dance), Russian (mommy’s favorite) and Chinese dances as well as the Waltz of the Flowers. Of course the grand finale involves a stunning dance performance by the Sugar Plum Fairy herself and her prince.

Waking Up – The show ends as Clara finds herself back in the chair by the tree holding her little wooden Nutcracker, the dream ending.