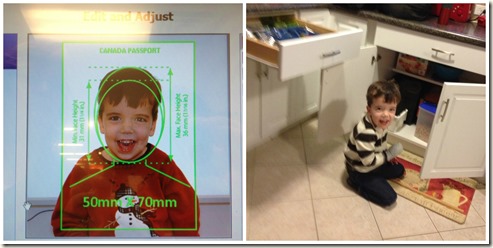 While we were getting Christmas pictures taken the other day, I had Isaac’s new passport photo taken. This is the second time I brought him in for one. The first time they didn’t want to take his picture because he won’t close his mouth and I can’t make him not smile; both are passport photo requirements. If you know our family, or have been a reader around this space for a while, you will know my son has special needs. Well, I took him down to the Passport Office in Hamilton and asked them what I should do for his photo. They let me know that they are more lenient with special needs people’s photos. So I’m sending in his application this week, I’ll update and let you know if it is accepted!

John has had a busy month too. He passed his Red Cross Swim Kids level one and is moving up to level two in January. He also decided that his neighborhood friend, who doesn’t know Jesus, needs a bible and plans to present it at Christmas. He wrapped it and it’s already to go!

The other day John asked me if he could have a snack. I said yes and next thing you know, John has made himself a ham sandwich. He dug out the bread and mustard, sliced his own cheese using a cheese plane and even put on lettuce! I was pleased at his independence but at the same time, there is a tiny little pang as I realize that my little boy is steadily on his way to becoming not a little boy.

And then he shows up to breakfast wearing a skipping rope to lasso the cattle and I realize that there is still lots of little boy left in him!

Speaking on silly little boys…he climbed into my bed the other morning when the sun wasn’t quite up. His hair was all tousled but his eyes sparkled. “Mom, I can whistle!” he tells me. “But you have to be very, very quiet.” He then proceeds to squint up his eyes and do something funny with his face. I can’t help but laugh. Then it dawns on me. “John?” I ask, “Are you trying to whistle through your nose?”. “Yes, and it’s not working. You aren’t being quiet enough!”. {maybe it loses in the retelling but it had me chuckling to myself all morning}. 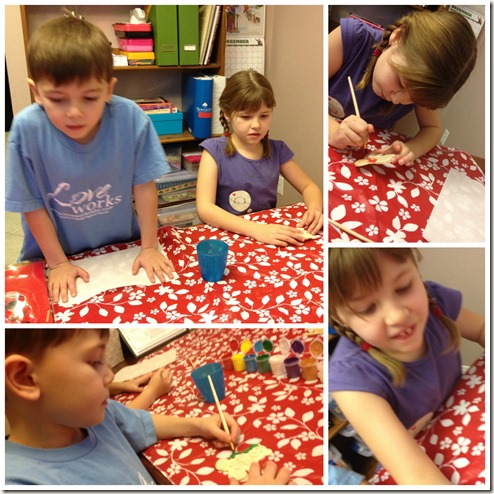 Chloe will be in Swim Kids Four in January. She didn’t quite finish the Swim Kids Five requirements so she was a little disappointed. On a happy-ish note, Chloe’s new glasses are on order. A visit to the optometrist two weeks ago revealed that Chloe’s current reading glasses were an incorrect prescription and that she needs glasses all the time, with a specialized bi-focal lens for reading. She wasn’t overly thrilled but I am. She struggles with reading and I’m hoping this will help!

The children have been busy this month helping me do some baking, painting ornaments for gifts and we’ve actually had a couple field trips this month too. It’s been busy, but a good busy.