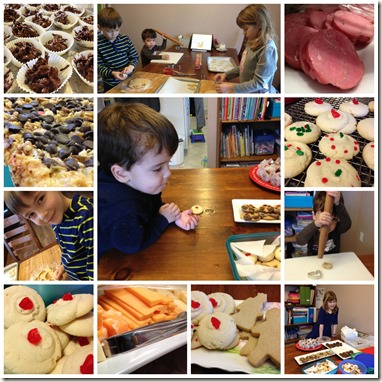 Somehow I seem to miss posting on Christmas or through the holidays and find myself playing a little catch up. I suppose I could write and schedule a post in advance but I like to write and share in the same day.

Our Jesse Tree.  This year we switched up our book; the book we used the first year I didn’t like, the second book {The Advent Jesse Tree} was pretty good and we used it for several years and this year we did Unwrapping The Greatest Gift: A Family Celebration of Christmas and I had mixed feelings. I loved the illustrations and I did like many of the ideas presented in the devotional. One idea that struck home for me was her statement of how messy and imperfect Christ’s family tree was. It struck home for me because we have never had a year where all the Jesse Tree ornaments made it onto the tree because we’ve never had a December where we have done the devotions every day. I like to do our Jesse tree devotions in the evening so that we can do them with daddy as a family; but we miss several nights. Previous years I was bothered by that. This year I just embraced it and moved on. His family tree was messy and imperfect and so is our Jesse tree. Christmas came anyway. The purpose of our Jesse tree is to trace our finger through the old testament with anticipation, knowing that He is coming – that He came. Him, focusing on Him. So maybe the tree didn’t turn out perfect, it never does, but as a family we focused more on Him than everything else this Christmas and that’s what it’s about.

We went to Bell Homestead with friends for a homeschooling outing; exploring Christmas in the 1800’s. We learned how to play Dreidel, baked some great shortbread cookies, did some crafts and had a wonderful tour.

We baked a number of goodies in preparation for our Christmas Eve celebration, our Christmas Day dinner with family and our New Years Eve party. We also made a number of paper Christmas ornaments using the Usborne Book of Christmas Decorations that we got on sale. Definitely fun!

And of course we went to The Nutcracker and painted wooden ornaments.

We had friends over for a simple meal – chicken sandwiches – with lots of extras like salads, veggies, shrimp and more. And of course all the baked goodies we made. We played Ticket to Ride and introduced some first-timers to the game too. We did singing, and I played {badly} along with some of the carols. Only 3 months of lessons so it went pretty good considering. The only thing was I can’t sing and focus on what I’m supposed to be playing so I quit to enjoy singing along. Speaking of which, one of the highlights was the typo in the song books: 2 tunic doves rather than turtle doves. Try singing that without laughing. Try singing that without laughing while sharing a songbook with my friend Sarah! Impossible!! 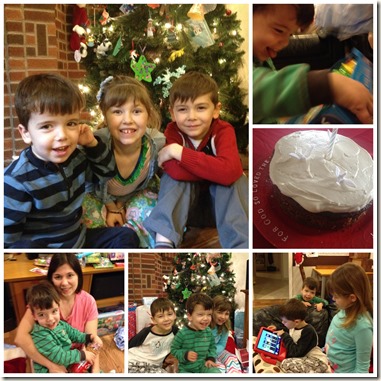 No presents until after 6am; Chloe and John arrived in our room at 6:03am. Chloe was watch-watching since 4am+. We woke up Isaac who was dopey but excited. He was crawling all over the place, unsure of what was happening but knowing something great was going to take place. We had a leisurely gift-unwrapping and then a quick breakfast and out the door to church. Christmas Dinner was shared with my sister’s family. We had turkey of course, with carrot cake this year for Jesus’ birthday cake. We don’t get together often so that was enjoyable for the kids; they love their cousins. But being up so early, we were all happy to crash into our beds that evening. 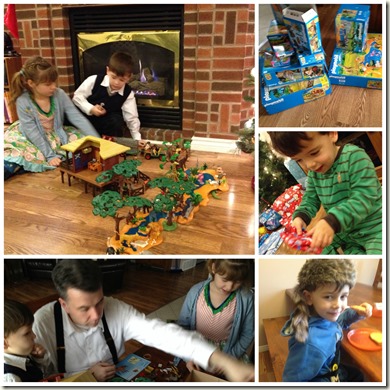 We had a great time on New Years Eve too. We kept it simple, too, with homemade pizza. I made the kids pizza in the oven and DH did the adults on the barbeque. He has a big green egg; it gets crazy hot and takes about 4 minutes to cook a pizza. We ate and played more Ticket to Ride, this time trying out teams in Asia which was really quite fun.

This year for our count-up we had party poppers from the dollar store. They are spring-loaded little capsules that shoot out a handful of confetti. I tried one before hand to make sure it wouldn’t make an overwhelming mess.  It seemed like an acceptable level of mess so we used them. DH thought it was a little anti-climactic and that they were too small but the kids seemed to enjoy them. This year was our latest night ever, wrapping up at almost 10pm! 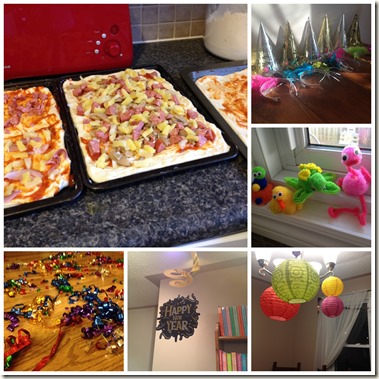 We kept it simple (again! delicious and simple!) and quiet; a day at home with a delicious dinner planned. Prime rib, loaded baked potatoes, broiled asparagus and chocolate dipped pineapple for dessert made for some delicious dinner. Yum!

A friend had given me a lovely platter the night before – one that matched my mother’s china set – so I immediately put it to use. Beautiful and useful; the perfect combination! 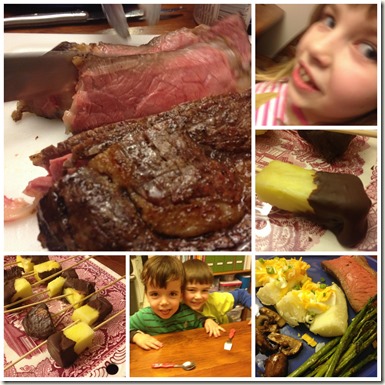 My husband had some time off over the holidays so we were able to spend a lot of family time together.