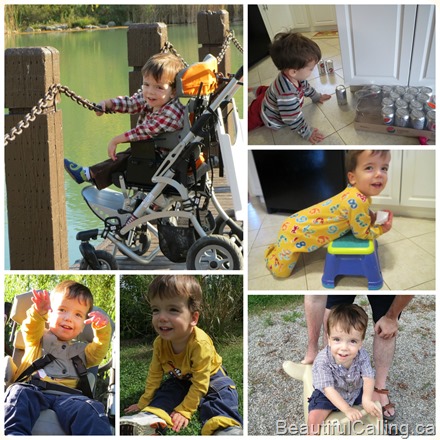 Isaac is 2 years and 4 soon to be 5 months, it seems incredible that it is so. Even more incredible is the progress that Isaac has made in the past 6 months.

May 6th we met with neurology regarding Isaac’s brain MRI from February 2013. I expected it to be a routine “we don’t see anything new”, but I was floored when the doctor said with certainty that based on the “increasing prominence of the VR spaces”  he believes that Isaac has mucopolysaccharidosis. MPS is a degenerative, metabolic condition for which there is no cure. It can lead to serious health complications and death; many MPS types have a shortened life span. I hadn’t expected that news.

In June we did an MPS screening test (urine) and in July it came back negative. Hurray, I thought. However, neurology still feels strongly that it is MPS and requested Ministry approval to do the official blood testing. Ministry approval is needed as the testing is done in a lab in Texas {we’re in Canada}. We should have the results back in late October or early November.

Good news though is that almost all our other specialists are just check-up appointments as things seems good. Even our last ultrasound revealed that Isaac’s largest kidney stone broke and passed {with minimal issue} and no new stones have formed. He still has a few small ones (4mm) but they will just continue to monitor.

Isaac started sitting just shortly before his second birthday. He has gotten much stronger and can sit {if he chooses!} for quite a long period of time, though often he isn’t interested in being in one place for long. He is unable to get in to a sitting position on his own but he is definitely able to get out of one on his own. He sits as long as he is interested then down he goes, army-crawling as fast as you can imagine, getting into this and that in typical two-year-old fashion.

This month several new skills started emerging, it’s so exciting! Isaac now has the strength to get up on his hands and knees but he doesn’t stop there, he rocks back and forth and once – he even moved one knee and then the other. This past week Isaac has also used a chunky baby utensil to {messily} eat and he also folded his hands during prayer before we ate. Usually I try to hold his hands but he won’t let me do it for long, tonight he did it all on his own. Mama was so happy. He’s learning, this sweet boy!

Isaac is using a Leckey Totstander a few times a day. Lansdowne, our therapy center, has one that we have been borrowing for a few months now and it really has been making a difference. Isaac is now weight-bearing on his legs for several seconds, often as many as 15 seconds. When sitting on the couch, Isaac can maneuver himself to where he is on his knees reaching up. It’s hard to find the words to describe how wonderful he is progressing, yet to not overemphasize his accomplishments either, for his delays are still significant.

He’s still his happy go-lucky self though at times, he gets very, very distressed and it is a challenge to calm him down. He still isn’t speaking at all, beyond “ahhh” though he does reach for things he wants, which helps in the communication department. We have speech therapy twice a month and are on the wait list for the Augmentative Communication clinic. Currently we are practicing with a Big Mack.

So we wait and we learn. Physio, speech, OT, doctors and specialists, medical terms; everything with Isaac is different and I welcome the opportunity to learn to help and parent him best. But can I just say life is good. Isaac is beautiful, as are my other two precious children. We live life and embrace the days that God has given us, for none of us knows how long we have.