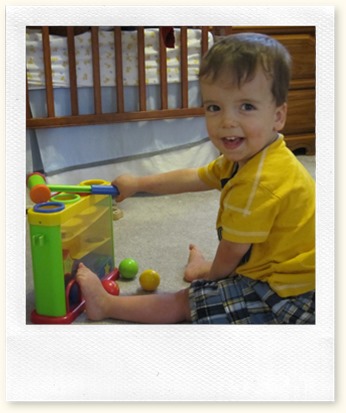 Physio and occupational therapy have been a part of our lives from the very beginning. June 2012 Isaac turned one year and it was time to set our therapy goal for the year. Our goal seemed lofty: Isaac to be able to sit by his second birthday. At the time, Isaac was just rolling over and had mastered relatively good neck control so imagining the time when he would be able to sit seemed far off indeed.

Well the past year has been filled with hard work, fun play and lots of progress but as the months ticked by, it felt like we weren’t getting any closer to our goal of sitting.

At 20 months, while he was able to do a little army crawl and get around the house like crazy but core strength to hold himself upright? No way.

Well, last month his core strength improved by leaps and bounds and over a few more weeks, he was sitting up with propping and then on his own. It started as a few minutes and last week, he sat up for a whole hour during his speech/OT appointment.

Isaac, my big little Isaac, you are the sweetest, happiest, most determined little boy. You will be 2 years old in two weeks and my wonderful boy, you did it!!! You’re sitting – You are Sitting!!!