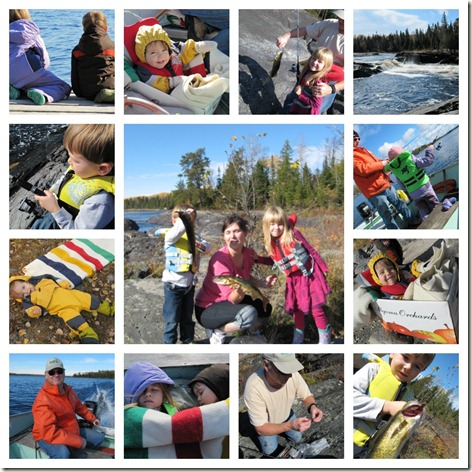 Thoughts on Fishing with Kids?

When possible – set them up for success. Go fishing at a good time. Use a little hook. If you catch one on your line, let them reel it in.

Rubber boots – they’re going to get a soaker.

Extra clothes – one of them is bound to fall in.

Expect Boredom – they’re going to get bored. Be prepared with suggestions.  When Chloe got bored of fishing, it was her job to catch minnows from the bucket for whomever needed one for their hook. They also threw rocks in, collected sticks etc.

Armed with Knowledge – it’s a great time for teaching so try work in those little facts. It’s fun and they’ll have no idea they are learning. Species, parts of the fish, what they eat, how they swim…beautiful isn’t it?

Hand wipes – everyone is going to want to catch the minnows and play with the slimy fish.

Fishing was on the agenda the first day we arrived in Sioux Lookout. I grew up there and it was delightful to go back with my children for a visit. My aunt and uncle still live there, right on the lake. They were kind enough to host our family for a few weeks. Family is awesome!!

The falls at English River was the most magical place ever when I was growing up. It still is. About a 45 minute boat ride up the lake, fishing off the rocks there is a sure thing. Chloe (5) and John (4) love to fish but not the kind of fishing where you hang out in a boat all day. They want action and English River is just the place for that.

I’d be lying if I said a fish with every cast but at times, that is very true. Other times, it’s maybe a fish every four casts! Really.

When I was a child, we’d go up for the day. We’d catch our limit then eat a wonderful picnic lunch of garlic sausage, cheese, snacks and bunwiches {packed sandwiches on buns rather than bread which makes it a bunwich rather than a sandwich}. After lunch, we’d don our snorkeling gear and head on a treasure hunt. You would be amazed at the bucket of tackle we’d find under rocks and snagged along the bottom of the falls.

Dad, the tots and I headed up on a bright, sunny fall day. All the tots had a little rest on the way up, snuggled under Aunty’s Hudson Bay blankets. Oh, I love those blankets. Since it’s October, our recent trip didn’t include any swimming but the tots caught a good deal of fish, pickerel and white fish, then had a wonderful picnic lunch. The weather was amazing, especially since just days later it was snowing! 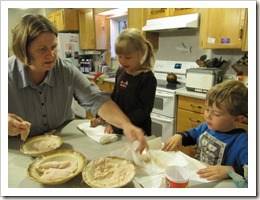 We had a big fish fry the following night and let me say, we all feasted. My aunt makes the best fish ever!! The children ‘helped’ and despite that help, it still tasted fabulous! Ha!

So what are your thoughts on it fishing with tots?