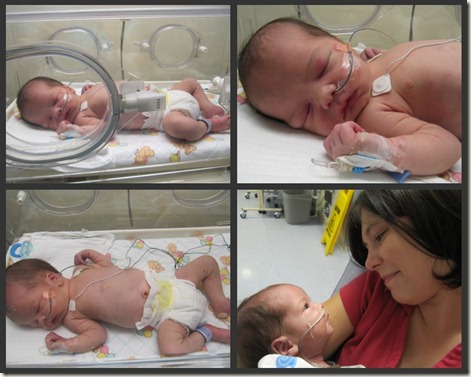 Isaac arrived on June 4th, born at home just as we’d hoped. All was well until 24 hours later he stopped eating and, as the night wore on, he became very lethargic. We were admitted to the hospital 36 hours later and then transferred to a neighboring hospital with a Neonatal Intensive Care Unit where we spent the next 5 1/2 weeks.

Isaac started out his time there in an incubator but then graduated to a crib when he started improving. He really liked the vibrating chair they gave him to sit in. He liked to coo and watch everything going on. {Nosy boy! It was so good to see him awake and interactive!} His crib faced the door so the nurses told him he was the doorman and he was to keep an eye on what was happening. He seemed to like that. He was also really excited when they gave him a mirror for his crib. He spent a lot of time smiling {or trying to eat?} his new friend in the mirror. 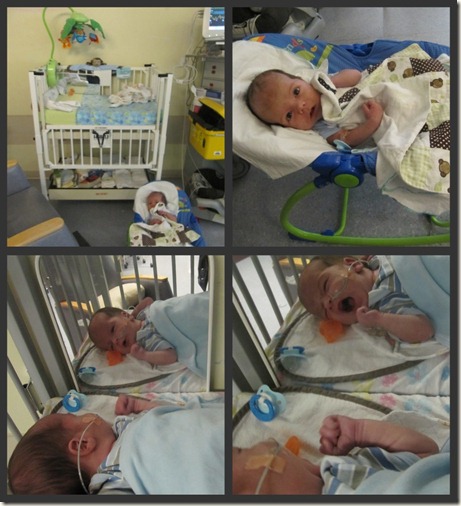 Isaac smiling {trying to eat?} his new friend in the mirror!

Isaac’s initial issue was with extremely low, unstable blood sugar levels. He would go into these deep sleeps that lasted a day and nothing could wake him.  He also had some brain swelling, was unable to eat on his own, and had high calcium levels resulting in deposits in his kidneys. We had every department of the hospital involved since it seemed like everything was going wrong with this little man, though none of the tests really came back conclusive.

Every day was different, some days he was doing well and then the next day it seemed we’d taken two steps back. ‘An emotional rollercoaster’ is what my mom called it. The staff and doctors thought him a little mystery.

We were discharged to come home late last week with 6 months full of follow-up appointments with 9 different doctors/departments and no actual diagnosis. The Lord just allowed his little body to repair itself and he suddenly just started eating.

In the Sunday School class that I help in at church, we learned the definitions of some of the words we hear a lot at church. A miracle is ‘something only God can do’. I truly feel that his recovery was a miracle.

This post in no way does justice to the experience; especially at the beginning  when I wasn’t sure Isaac was going to make it.

Isaac was so sick. There were so many unknowns.

But God knew it all and allowed it to be and then not to be.

Because He has a plan.

Because He knows best!

And I trust Him. I really do.

I‘m so thankful to my parents for their support and prayers as well as for caring for our Chloe & John. Because the children lived with them, I was able to spend the entire time with Isaac and DH was able to come up each evening.

I’m thankful for the love and support of my sister, who took my children on all sorts of adventures and gave mom the occasional break.

I’m very grateful that the hospital has ‘bunk rooms’ for parents to stay in so I could be there the entire time with Isaac and not have to do the commute! I’m also thankful to Dr. Giglia and all of the fantastic nurses and staff. They were supportive and amazing.

I’m also thankful for the letters, emails and prayers of all the individuals and churches.

But most of all, I’m thankful that I didn’t have to go through this experience alone. I am thankful that God was (and is!) in control of all and that He walks along side me each step, providing the strength I need for each day.

So I guess I’m feeling overwhelmingly blessed and thankful today – and rightly so!

A post is definitely coming about Isaac’s birth story but, for now, online time is hard to come by.

Mommy, Chloe & John on a picnic at the park near the hospital. Daddy & his littles relaxing at home – finally!