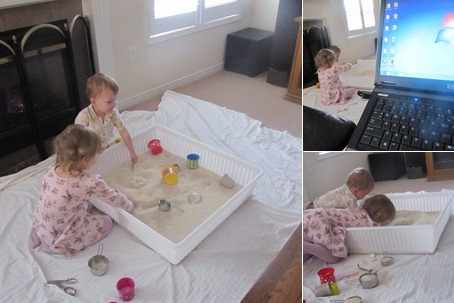 Routine at our house has flown out the window. The little ones had mild symptoms from their Typhoid and Yellow Fever shots (for Africa), then they caught bad colds and we dealt with that for a week and then last week they had a stomach bug complete with vomiting and diarrhea.

This week I have had a Bunwich order Monday, Tuesday and I have another one today. I need to start it in about an hour. This is good, but busy.

I have tons of stuff piling up in my reader; there’s just been *no*time* but I’m {sneaking in} a few minutes right now while my little ones are entertained with a box of rice. It’s drizzly and chilly out; we’ve got the fireplace on and it’s nice and toasty.

They LOVE to play with their ricebox. I used to fuss about keeping it in the bin but as long as it is on the sheet, I’ve found that I just grab one end and tipped it all back in. The ricebox just slides right under our coffee table so it’s easily accessible, making it a breeze to get out on a whim and put away in a flash!

Most days I play with them, we have measuring cups and measuring spoons {really awesome ones from Epicure, let me know if you want to order some} and we talk about measurements. It’s a sensory experience and there is so much to learn. It’s very educational but many times we just drive trucks in it, build hills and roads.

I’d have loved dried corn like at the play centre at the agricultural fair but rice is nice too isn’t it?

So that is what we are up to today…rice, Bunwiches and a giveaway a little bit later.

Alas, it is inevitable; they get a little too excitable and it is time to put the rice away…

This was taken several weeks back. John woke up from his nap before Chloe and had a chance to play all by himself. He was very sad when it was time to put the rice away. Poor baby!