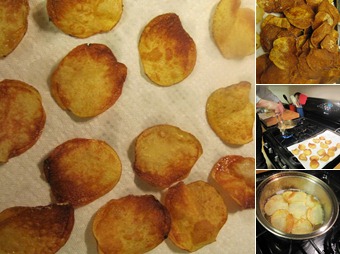 It’s Friday night. We just put the littles to bed. We’re going to watch a movie but we’re feeling munchy. We don’t have anything snacky; then DH said, “Let’s make chips”.

We (DH) sliced the potatoes super thin (using a mandolin), gave them a pat dry, fried them in about 2” of vegetable oil (about 375 def F). Then they went straight onto paper towel and received a sprinkling of salt.

I put together a quick sour cream dip (remember, I’m an Epicure Consultant!)

Oh, DH  also made some tempura mushrooms by slicing them, then battered them with an ice-water and flour mixture and dropped them into the hot oil. He’s a self-admitted cheapskate and since the oil was hot and on the stove, he wanted to make the most of it. That, and he loves mushrooms 🙂

OK, now to decide on a movie…

Have a great weekend my friends!