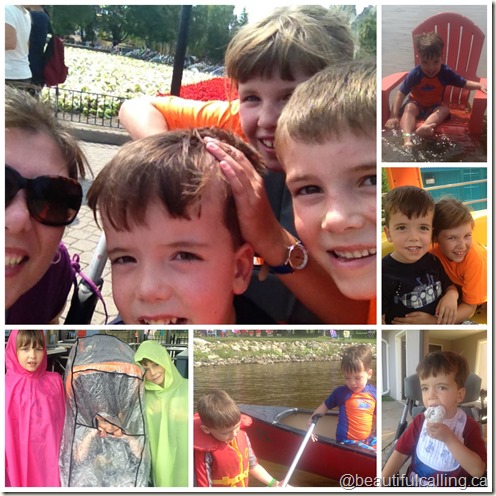 My sweet little boy turned four in June. Isaac has come so far in the past four years.

The twinkle in his eyes…

He certainly has his own little personality. You can tell he’s a stinker at times just by the twinkle in his eyes. He also has quite the sense of humor as he laughs at things. He loves to watch Barney. I think it is the colors and the music. Anyway, he was watching Barney the other day and I was in the other room folding laundry. When the doorbell rang, I answered it expecting the UPS man or something. It was Isaac standing there. He’s now an expert at doorknobs so we are now being vigilant about locking doors.

He also helped himself to John’s bath the other day, PJ’s and diaper and all. I had run a bath for John and then when I returned, Isaac was sitting happily in the middle of the tub, fully clothed. He does enjoy playing with water!

You’ll recall Isaac was able to hold his head up near his first birthday and for his second birthday he sat up for the first time. He also had army crawling down pat. For his third birthday he mastered crawling on hands and knees. It made me look forward to his fourth birthday; it’s around his birthday that he seems to hit these milestones.

Isaac started bearing weight on his legs and pulling to stand several months prior to his birthday. Then he started cruising. By his fourth birthday he could cruise around holding furniture with no problem at all. Well, just a few months after turning four, he WALKED.  It started the first week of September. Camping with my parents, dad and I were in the water with Isaac and he was walking back and forth about 6 steps in between us.

Thursday night Isaac walked from one side of the hall to the other at our church, unstable and flailing as he toddled across, he had a giant smile on his face.

Thankfully the appointments that have consumed so many of our days are now slowly dwindling. Once upon a time we saw a list a mile long of specialists. A little at a time we’ve been discharged from each. Our most recent discharge was from metabolics/genetics. They have done all the tests that there are available, with no conclusive results. They did discover two genetic variants that showed up in the tests: the first variant is linked and explains his kidney stones and nephrocalcinosis. The second variant is linked to nocturnal epilepsy which might also explain why most of Isaac’s seizures come early in the morning. We now only see  ophthamology (eyes)and nephrology (kidneys).

And of course our various therapies, you can’t forget those.

Isaac is doing fantastic at physio. Occupational therapy is fun as he loves the activities but sitting and focusing is a challenge for him as his attention span can be very, very short depending on the day. Speech therapy is going well. Isaac is slowly being taught to use an iPad. They are using it to help him communicate simple ideas right now (i.e. what toy would you like to play with, what would you like to eat?) but will over the years graduate to more complex communication.  Isaac has his very own iPad on order right now, complete with unbreakable case and the specialized software program. I’m looking forward to working more with him on that in the coming year. Less yelling, less frustration on his part would be good!

Life with this little guy is never boring and he definitely keeps me busy. I sure love him!