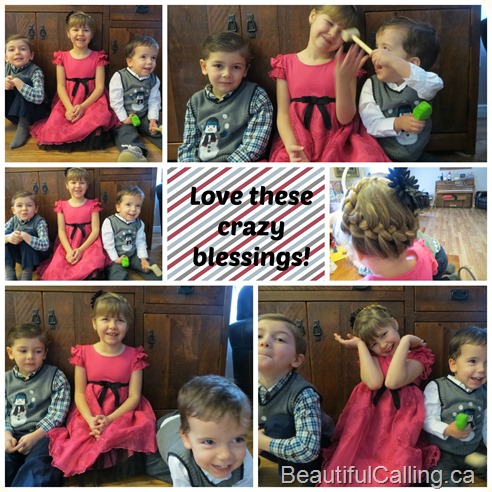 Me: It’s when people jump out of a plane wearing parachutes.

Chloe: Oh, and then plane is on fire.

Me: Why is the plane on fire?

Chloe: Why else would you jump out of a plane?

The other morning on the drive into Isaac’s appointment, John was singing the following song with all his heart as he looked out the window – completely in his own little worship world:

I love God. I’m worshipping God. He wants me to obey my parents and do good things and he will help me. I’m his handiwork and he is mine. [mama made a note-to-self to talk about this one at a later date] If Pastor likes to eat cheese, we could call him Cheese Eater. Maybe he’s a mouse. I will pray for Pastor. Thank you God for our Pastor and church and this wonderful day and for all our missionaries who go around the world telling people about Jesus and the world. You died for us because you love us and I will tell everyone about your love…

and the song went on and on and on and on. It was a beautiful window into his soul, and I thanked God for my little boy – as I tried not to snicker too loudly!

John also made me laugh as he talked, very seriously, to Gigi about the “gasoline in your coffee that keeps you not asleep.”

As you know, John loves to sing to himself. Singing Rudolf, John apparently has his own little version? It’s been corrected now but I had to share: “Rudolf with your clothes so tight, won’t you guide my sleigh tonight…”

And while Isaac doesn’t speak, I should mention that he adds a lot of humor to our days as well. From falling INTO the bathtub, putting bath toys in the toilet and eating the icing off his treats and putting them back on the plate and taking another icing covered one to picking up a whole chicken breast of a plate that didn’t belong to him and munching down on it, he’s been a riot this month.

Isn’t Chloe’s hair neat? Crown braid. My sweet friend Amy used to do my hair like that!