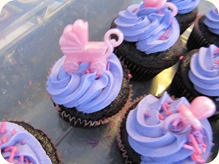 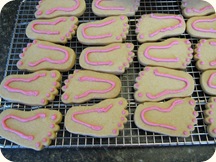 Whew, it’s been a busy week. Wednesday we did baking for our youth pastor’s wife’s baby shower on Thursday. I am absolutely kicking myself for not taking pictures of the food table. I was so happy with how it turned out. I don’t know what the final count was but we expected about 50.

We made delicious bunwiches (grilled chicken, roast beef, pastrami, smoked pork loin and baked peameal) and served them with my homemade sweet pickles, onion pickles and beets. John helped assemble the veggie tray while Chloe organized the crackers around out delish cream cheese and red pepper jelly. We made heart shaped rice crispy squares and ‘feet’ cookies for the littles, and orange pound cake with banana bread for the not-so littles. We also made chocolate and vanilla cupcakes iced with pink and purple. We assembled them on pink hatboxes…or should I say Chloe assembled them there. What a little helper. Exhausting, but fun! A late night for Chloe since we didn’t get home until 10:45pm.

Friday we headed to Gymboree to redeem some Gymbucks and Chloe delightedly picked out this adorable tutu. Since she was two, she’s had a thing for tutus and I indulge. There is only a limited time frame in which one can wear tutus {and so looks so cute!}. We also used some free sub coupons for an entirely free meal out, just paying for DH’s pop. How neat is that? 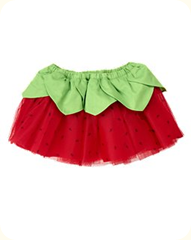 Saturday morning was our usual McDonald’s breakfast and a quick trip to the grocery store. Some 50% off bread, a half price cherry pie and some laundry soap and we were on our way home. The littles bundled up and headed out to play in the snow {which had already been shoveled twice today, once by me and once by DH}. About 14 minutes to get them ready and they were outside for almost 20 minutes. LOL. Rosy-cheeked and happy, they came in for a nice peppermint milk hot chocolate with their lunch and then all down for a nap. 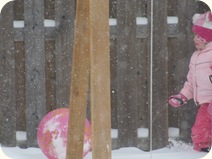 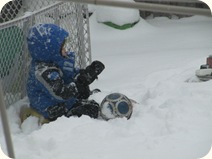 We had a delightful evening with friends, enjoying dinner at their home. We had barely walked in the door after arriving home when John was sick all over. A bug? An overindulgence of sweets while we were out? I wonder how the night will go.

I’m just writing up John’s birth story. I hope to share that in the next few days. It’s much shorter than Chloe’s. Monday at midnight the Winter Follower Giveaway starts. That should be exciting.

We’re having a turkey week according to DH. A fantastic deal on turkey means a turkey dinner, then turkey sandwiches, then turkey soup. Gobble, Gobble…

Today is January 15th. Fifteen days into the new year and we haven’t yet gotten back in to our routine yet but am hopeful for the coming week. Though we do have a play date scheduled on Monday and I have a prenatal appointment on Tuesday, we have no other plans this week.

Has January brought a return to routine for your family or are you still struggling in holiday mode?