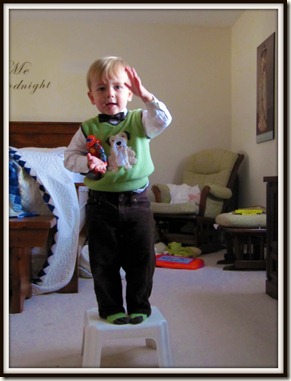 Last Sunday morning while I was getting ready, John was warming up his vocal chords. He enjoys bringing the step stool out of the bathroom into the middle of the room. Then he hops up there and begins belting out his Sunday school songs while leading the {imaginary} choir. This isn’t just a Sunday thing for him but he looks particularly cute on Sundays don’t you think? 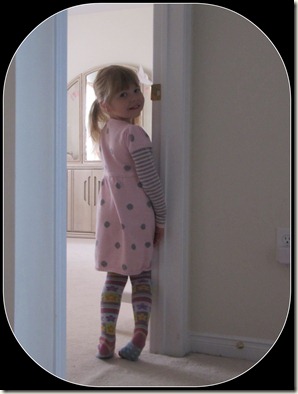 This little bear brings a smile to my face, oh, so often. Sometimes it’s because of her poochy lip as we learn to obey and share though other times it’s that impish little smile or her choice of tights.

This week has been another tiring one and the morning sickness has arrived too. I console myself with the {old wives tale?} saying that the sicker you are, the healthier the baby. Either way, I’ve cut back to basics this week and though the house wouldn’t win any awards, we’re wearing clean clothes, we went swimming this week,  and enjoyed time outside each day. I’d say that this was a good week.

Next week we are starting our first home school year. Is homeschool one word or two, do you think? The spell check doesn’t like it as one word that is for sure. Part of me thinks I should wait. I’m in the throes of exhaustion and morning sickness, the house isn’t organized…yada yada yada. But you know, there will never be a perfect time to start anything. Have you ever thought, “If I can just get the entire house organized, then I will…” or any other if/then thoughts?  I’ve thought that in the past about my spiritual life as well, that if I could just get ____ in order and then I could talk to the Lord about it. But all those ideas are false! The way to get things accomplished is to just start where you are! (but more on that next week)

What are you going to start this week?