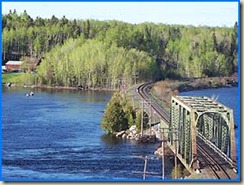 The Iron Bridge Back Home

I grew up in a little tiny town in Northern Ontario. We lived in “the country” as we say here in southern Ontario and “the bush” as we would have said back home. Our nearest neighbors were my grandparents who lived on the other side of the garden. It wasn’t until I was grown up that I realized how truly blessed we were by having them so close to us and involved in our lives.

Most Friday nights we would sleep at Gran & Gramp’s place. It was an occasion to look forward to! Gram would usually make popcorn and we would excitedly put on Grampa’s cotton undershirts to sleep in. He had blue, orange, brown…which to choose? Looking back…I sort of think “eeww”, but you know they were soft, big and roomy and it was like wearing a dress. It was so exciting. Though they did have a guest room, we always pulled out sleeping bags and crashed on the living room floor. Did I mention, we were allowed to stay up and watch TV as late as we wanted? LOL. The only stations that we had back then were TVO or CBC. Most nights we fell asleep reasonably early (despite Grampa’s LOUD snoring), but on those rare occasions that we did make it until midnight, we were able to witness those colorful vertical bars that show at midnight when the stations go off the air for the night. Oh, those were the days!

Saturday mornings we woke up to find Gram in the kitchen at the table reading her bible. She always beat us up in the morning (that sounds a little odd doesn’t it?). We would go in and wake Grampa up because it was time for our Reddy Fox Story. This may well have been one of the highlights of visiting Gramps, though there were many and it would be hard to narrow it down to just one. Anyway, Reddy fox was an curious (and sometimes naughty) little fox who went on all sorts of adventures. He always seemed to learn something on each escapade he went on. Lessons about friendship, telling the truth, sharing etc. Grandpa always had a new one each week and if you know Grampa, you will agree that he has a flair for story-telling.

Grampa would eat his breakfast in bed while telling the story and then he would get ready for the day, while we ate our breakfast. I am sure that we ate nutritious breakfasts there but at this moment I can only recall the times that Gram let me eat ice-cream for breakfast 🙂 After breakfast was garbage run. What is that you may ask? Well, living in the country we didn’t have garbage pick up, we took our own to the dump. Upon arrival, we disposed of our the garbage we brought and Grampa always encouraged us to see if there were any ‘treasures” we might like to take home. I’m sure inwardly he was chuckling but you would be amazed at the wonderful finds we came home with. One time in particular stands out: the time I found a plug-in star for a Christmas tree. It had a light in it and the heat from the light made a plastic shade spin so it put brightly colored stars all over the walls and ceiling. Or in my case, it put half stars everywhere because it didn’t work quite right but i loved it. I plugged it in every night to go to bed! What a find! The other exciting thing about the dump was that grampa would speed around with the windows down in the tiny Toyota truck and my sister, brother and I taking turns hanging out the window as we chased down seagulls and attempted to catch them. Grampa was always certain that if we just went a little faster, tried a little harder and reached a little further that we would get it on the next try. Alas, we never did. There were also bears, bears everywhere. Sometimes one or two and other times there would be a dozen. Never a dull moment there!

After the dump came Gerties. Gertie was an unfriendly old lady who ran the local candy shop. She was always grumpy and impatient…I always got the impression that she didn’t like children and it seemed she was in the wrong profession. But regardless of whether or not I was fond of Gertie, I certainly was fond of treats! Grampa would give us a dollar and in we would go. For a dollar you could buy a whole lot…a pop and chips, or a myriad of sugary confections or delectable bulk chocolate. The options were endless but Gertie’s patience was not! We eventually decided upon our treats and off we went home. You would think by then that we had a full day however there was more still to come: baking with Grandma and building with Grampa.

In the sake of saving time, and because this post is really about Gramp – we’ll come back to the baking later.

Grampa had a garage with a workshop out back. He heated his garage with a barrel turned into a woodstove. This is an important thing, the heat I mean, because winters back home could be minus 40 or so! Providing we were careful, we were allowed to play in the fire (*gasp*). What great fun it was and really, is that any more dangerous than hanging out a window flying around at breakneck speed in the dump and a million other crazy things that Grampa and dad had us doing? Anyway, we could play in the fire, build things with scrap wood and nails and a variety of other projects. We made many many wonderful things in that shed throughout the years.

Gramp and Gram had a great big boat with a cabin and we spend many wonderful times fishing, camping, and swimming. Almost every childhood moment incorporated Gran and Gramp in some way.

I am so thankful for Grampa. There is so much more that I could write but this will have to suffice. For those who don’t know, Gramp is in the hospital right now. Please pray for him! And check back on Wednesday for WFMW-Frugal Garden Decoration compliments of Grandpa!