It’s Monday again and time to showcase one of our “caffs” from last week in Magic Marker Monday.

For those who missed the post, our VBS theme was Polar Extremes and I was teaching the littlest of the littles…those too young for VBS whose parents were working in VBS. Our biggest day we had 8 little ones; 2 x 3 year olds, 4 x 2 year olds, 1 x almost 1 year old and a baby about 5 months. What a busy and fun time we had! The following pictures show mommy’s sample craft and Chloe’s completed one. She is doing a really great job in her crafts! (Did you see our Polar Bear and Snowman last week?) 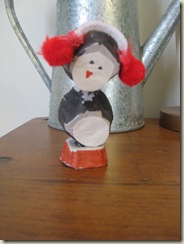 Egg Carton Penguin Craft Supplies: Egg Carton, Pipe Cleaner, Construction paper, Glue, Pompoms. (and lest you think I am very smart, I actually found the idea here). Because i was working with toddlers, I made the earmuffs, cut out the cartons and colored them before class. For the actual craft, we pasted the belly and face on, along with wings and put his earmuffs on. They thought it was wonderful!

For the record, this one was one of the trampled on ones who has no little wings and his ear muffs had to be repaired after someone pulled him apart. Chloe gave hers to Nana before I could take a picture and I gave mine to the little person who made this one because I had to bring him home to fix him. 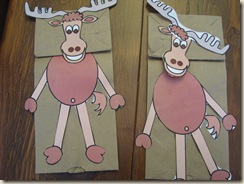 Paper Bag Moose Puppet Supplies: Paper bags, glue and the template. You can either go with color or B&W which is a nice feature. Again, not my idea but this was a huge hit with the littles since once they were done they chased each other around with it on their hands. lol.

Review: A Grain of Rice by Helena Clare Pittman